Home 4th Semester Company Law What is Memorandum of Association? What is its importance? What are its... 1. Name.- The first clause of the memorandum is required to state the name of the proposed company. A company being legal person, must have a name to establish its identity. If the liability of the members is limited, the last word of the name must be “Limited” and in the case of a private company. “Private Limited”. The name of the company must not be identical with or so nearly to resemble the name of another registered company as to be calculated to deceive.

2. Registered office.- The second clause of the memorandum must specify the State in which the Registered office of a company is to be situated. The exact location of the registered office must be intimated to Registrar within thirty days of incorporation or commencement of business whichever is less.

4. Limited liability clause.- The memorandum of a company limited by shares or the guarantee shall also state that the liability of its members is limited.

5. Guarantee on being wound up.- The memorandum of a company limited by guarantee shall also state that each member undertakes to contribute to assets of the company in the event of its being wound up while he is a member or within one year after he ceases to be a member.

6. Capital clause.- In case the company is limited by shares:-

(a) It shall state the amount of share capital with which the company is to be registered and the division thereof into shares of a fixed amount;

(b) The number of shares taken by each subscriber mentioned opposite to his name. (No subscriber shall take less than one share). What is meant by winding-up of a company and what are its various mode? What are the Various Duties Imposed on the Directors of Company Discuss the powers of directors? 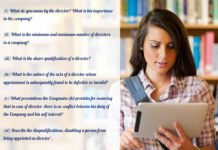 What do you Mean by the Director