Ans. 1. Right to Property— Since after the 44th Amendment “right to property as was given Under Art 31 is no longer a fundamental right, hence this topic may be studied under the following two heads A. Position of Art 31 Before the 44th Amendment, 1978 -The provisions of Art. 31 before its deletion were as follows:

1. No person shall be deprived of his property save by the authority of law-Art. 31(1).

(a) That the compensation under Art, 31 (2) should be just compensation. If no method of valuation is laid down or if such method is, not reasonable, the Courts would, certainly interfere in the matter.

(b) That any acquisition satisfy not only Art. 31 (2) but also Art, 19 (1) (f). reverse both the above principles enuciated by the decision, Parliament immediately passed the 45th Amendment to the, Constitution, where by the word ‘compensation’ was replaced by word “amount”. The Amendment also clarified that such amount could be paid otherwise than in cash. It was furtner provided by the Amendmet that Art. 19 (1) (f) would not apply to any law relating to the acquisition or requisition of property for a public purpose. After this amendment, Art 31 (2) stood as follows-

2. No property shall be compulsorily acquired or requisitioned save for a public purpose and save by authority of a law which provides for acquisition or requisitioning of the property for an amount which may be fixed by such law, or which may be determined in accordance with such principles and given in such manner as may be specified in such law: and no such law shall be called in question in any court on the ground that the amount so fixed or determined is not adequate or that the whole or part of such amount is to be given otherwise than in cash—Provided that in making any law providing for the compulsory acquisition of any property of an educational institution established and administered by a minority referred to in Art. 30 (1), the State shall ensure that the amount fixed by, or determined under, such law, for acquisition of such property is such as would not restrict or abrogate right guaranteed under that clause.

This Amendment was challenged in Supreme .Court in Swami Kesavananda Bharati Vs. State of Kerala, A.I.R. 1973 S.C. 1461. The full Bench upheld this Amendment in substance. Howevzr, it ruled that the courts could decide on the point as to whether a particul at amount paid for property acquired by the Government is Arbitrary or illusory in a given case.

(2A). Where a law does not provide for the transfer of the ownership or right to possession of any property to the State or to a corporation owned or controlled by the State, it shall not be deemed to provide for the compulsory acquisition or requisitioning of property, notwithstanding that it deprives any person of his property.

3, Art 31 (3) provided that if a law relating to compulsary acquisition or requisition of property has been passed by a State Legislature, it would not have effected, unless the President assents to it .

(b) The provisions of any law which the State may herein after make—(i) For the purpose of imposing or levying any tax or penalty; or; (ii) For the promotion of public health or the prevention of danger to life or property; or (iii) In pursuance of any agreement entered into between the Government of the Dominion of India or a Government of India and the Government of any other country, or otherwise, with respect of property declared by law to be evacuee property.

6. Art 31 (6) made certain provisions for State laws enacted before the Constitution came into being. It may be noted that compulsory acquisition of property can be only for a public purpose. It is open to the Courts to inquire into the question as to whether compulsory acquisition under a particular statute is for a public purpose. In State of Bihar Vs. Kameshwar Singh, A.I.R. 1952 S.C. 252, the Supreme Court observed, that tne definition of “public purpose” is elastic, and the concept changes with time and the state of society and its needs.

B. Position After the 44th. Amendment, 1978-This Amendment omitted Art. 31 completely, and new Chapter, viz, Ch. IV was introduced in Part XII of Constitution, and this Chapter now contains a new Art. 300A which provides as follows — “No person shall be deprived of his property save by the authority of law.” The effect of this amendment in short, is as follows—(1) The right to property is no more a fundamental right. Rather, it is relegated to Ch. IV of Part XII of the Constitution. (ii) The new Art. 300A, is identical in terms with the former Art. 31 (1) Therefore, the comments and judicial observations on Art. 31 ( I ) would also hold gpod for Art. 300A, subject of course, to the fact that the right is no more a fundamental right. However, there are no provisions now corresponding to sub-clauses (2) to (6) of Art, 31.

The Attorney-General— Art. 76, 88 and 124 contain important provisions regarding the Attorney General of India. The President appoints a person who is qualified to be appointed a Judge of the Supreme Court to be Attorney General for India.

2. (a) He must have been, for at least five years a Judge of a High Court, or of two or more such Courts in succession, or

(b) He must have been, for at least ten years, an advocate of High Court, or of two or more such Courts in succession,

Duties of Attorneys-General— His duties are to give advice to the Government of India upon such legal matters, and to perform such other duties of a legal character, as may be referred or assigned to him by the President, and to discharge the functions conferred on him by this Constitution.

Rights of Attorney- General—The Attorney-General has the right of audience in all Courts in India [Art 76 (3)] as also the right to speak in, and otherwise to take part in the proceedings of either House, any joint sitting of the Houses, or any committee of Parliament of which, he may be named a member, but is not by virtue of this Article, entitled to vote Art. 88. As the head of the Indian bar, he is also entitled to precedence in all courts.

3. Fundamental Duties—Art. 51 A, which was introduced by 42nd. Amendment, provides for ten fundamental duties of every citizen of India as under —

(b) To cherish and follow the noble ideals which inspired our national struggle for freedom;

(c) To uphold and protect the sovereignty, unity and Integrity of India;

(d) To defend the country and render national service when called upon to do so;

(e) To promote harmony and the spirit of common brotherhood amongst all the people of India, transcending religious, linguistic and regional or sectional diversities;. to renounce practices derogatory to the dignity of woman;

(f) To value and preserve the rich heritage of our composite culture;

(g) To protect and improve the natural environment, including forests, lakes, rivers and wild life, to have compassion for living creatures;

(h) To develop the scientific temper, humanism and the spirit of inquiry and reform;

(i) To safeguard public property and to abjure violence; and

(j) To strive towards excellence in all spheres of individual and collective activity, so that the nation constantly rises to higher levels of endeavour and achievement.

4. Doctrine of Collective Responsibility—The doctrine of collective respobsibility of ministers connotes that members of the Council of Ministers are jointly and severally responsible to the House of the People, for every legislative and executive act of the Government, as also for every legislative measure introduced in Parliament with the authority of the Government. The responsibility of the Ministers, individually and collectively is secured by the fact that the ministers can be dismissed from office as soon as they lose the confidence of the House of the People.

(i) Responsibility to the Legislature—Regarding the responsibility to the legislature, Art. 75 of the Coastitution provides that the Council of Ministers is collectively responsible to the House of the People. The result is that the House of the People can dismiss the Ministry by passing a vote of no-confidence against it or rejecting a Bil introduced by the Ministry. It is also provided that the salaries and allowances of the ministers are to be such as Parliament may, from time to time, by law, determine. The result of this provision is that the House of the People can force a minister to resign by reducing his salary to a nominal amount or rejecting it altogether. In this way, an individual minister can be disposed of. 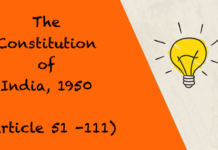