Direction : Read the following passage carefully and pickout the appropriate response to the questions given at the end of the passage.
All men have some degree of physical courage—it is surprising how much. Courage, you know, is like having money in the hank. We start with a certain capital of courage, some large, some small, and we proceed to draw on our balance, for, don’t forget courage is an expendable quality. We can use it up. If there are heavy and, what is more serious, if there are continuous calls on our courage, we begin tc overdraw. If we go on overdrawing, we go bankrupt—we break down.
You can see this overdraft mounting clearly in the men who endure the most prolonged strains in war; the submarine complement, the infantry platoon- the bomber crew. First there comes a growing impatience and irritability; then a hint c’ recklessne.ss, a sort of ‘Oh to hell with it, chaps we’: attack’ spirit; next real foolhardiness, what the soldic. calls ‘asking for it’ and last, sudden changes of mood from false hilarity to black moroseness. If before dux stage is reached the man’s commander has spound what is happening and pulls him out for a rest. be will recover and in a few months be back again in brave and as balanced as ever. The capital in bank of courage will have built up and he can start spending again.
There are, of course, some people whose capital ss so small that it is not worthwhile employing them in peace or war in any job requiring courage—they overdraw too quickly. With us these types are sorpri,ngly few. Complete cowards are almost non-eustent. Another matter fitr astonishment is the large umber of men and women in any group who will behave in emergency with extreme gallantry. Who they will be you cannot tell until they are tested. I !Eng ago gave up trying to spot potential VCs by licir looks, but from experience, I should say that those who perform individual acts of the highest physical courage are usually drawn from one of the me.categories.. Either those with quick intelligence Jai vivid imagination or those without imagination aid with minds fixed on the practical business of in-tfig. You might almost say, I suppose, those who bye an their nerves and those who have not got any amves. The one suddenly sees the crisis, his imosJnation flashes the opportunity and he acts. The ober meets the situation without finding it so very mosital and deals with it in a matter of fact Way.
1. Courage is like having money in the hank because
(A) like money in the bank it grows with time
(B) if we keep on drawing on our reserves of courage without rest we may lose it completely
(C) it is an expendable quality
2. The overdrawing of courage can best be seen during
(A) peace time
(B) cease fire
(C) war
3. The symptoms of the impending break down (in the right order) are
(i) recklessness
(ii) change of mood to moroseness
(iii)impatience and irritability
(iv)asking for it.
(A) (i). (ii), (iii) & (iv) (B) (iii), (i) (iv) & (ii) (C) (iii), (ii), (i) & (iv) (D) (iv), (iii), (ii) & (i)
4. The commander can save his men froin suffering a breakdown by
(A) giving a peptalk to them
(B) by reprimanding them
(C) spending lot of time with them
(D), pulling them out for rest
5. Those who display extreme gallantry are those
(i) who live on their nerves (ii) who get on your nerves (iii) who have not got any nerves
(A) (i) & (iii ) (B) (i)&(ii) (C) (i) & (iii) (D) all the three
Solution:
1.(B)
2.(C)
3.(B)
4.(D)
5.(A)
Advertisement 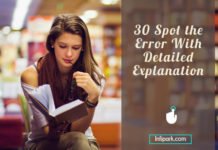 30 Spot the Error With Detailed Explanation Spot the Grammatical Mistake/Error in Sentence – 1 Old and New Names of Some Countries – General Knowledge 2017 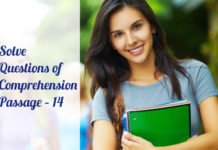