Aga Khan Palace : In Pune where Mahatma Gandhi waskept interned with his wife Kasturba Gandhi. Kasturbadied in this palace.

Alexandria : City and sea-port of Egypt founded byAlexander the Great.

Allahabad : (Prayag) is a city in Uttar Pradesh situated atthe confulence of the Ganga and the Jamuna. KumbhaMela (religious fair of the Hindus) is held here once inevery 12 years.

Amarnath : Situated at a height of about 4054 metres inKashmir. It is a place of pilgrimage for the Hindus.

Angkor Vat : A ruined city in Cambodia where beautifulspecimens of ancient Indian art and culture are found.

Athens : The International Olympic Committee (IOC) onSeptember 5, 1997, awarded the 2004 Summer Olympicsto Athens, the Greek capital which was the birth place ofthe Games. Athens hosted the first modern Olympics in1896 but lost out to Atlanta in 1996 Centennial Games.

Aurangabad : One of the important towns of MaharashtraState; tomb of Emperor Aurangzeb and of his wife. Elloraand Ajanta Caves are reached from here.

Auroville : It is an international township constructed inPondicherry with the help of UNESCO.

Badrinath : Himalayas; Place of pilgrimage for the Hindusnear Gangortri Glacier.
Baroda : Capital of the former Baroda State is known forLaxmi Vilas Palace which is one of the most beautifulpalaces in India.

Belur Math : It is monastery near Calcutta in West Bengalfounded by Swami Vivekananda. A beautiful templededicated to Sri Ramakrishna Paramahamsa.

Bethlehem : Palestine; about 9 km South of Jeruselam;birth-place of Jesus and Kind David; Church of Nativity.

Buckingham Palace : In London; residence of the Royalfamily of England.

Buddha-Gaya : It is situated 10 km south of Gaya in BiharState on the river bank of Lilajan and famous as the placewhere Buddha got enlightenment. There are modernmonasteries, rest houses and museum.

Calcutta : West Bengal Government re-christenedCalcutta as Kolkata with effect from January 1, 2001.Siliguri has been renamed as Shilliguri.

Cape Comorin : also called Kanya Kumari in Tamil Nadu,where Arabian Sea and the Bay of Bengal meet the IndianOcean. It gives a beautiful view of sun-set and sun-rise.

Chidambaram : Famous for its great Hindu Siva temple,dedicated to Nataraja or Siva in his aspect of ‘Cosmicdance’. Annamalai University is located here.

Chittorgarh : Ancient capital and fortress of Udaipur;known for Tower of Victory and Mira Bai’s Temple.

Dakshineswar : 8 Kns from Calcutta where Vivekanandawas initiated into religious life by Sri RamakrishnaParamahamsa.

Durand Line : the line demarcating the limits of neutralterritory between Pakistan and Afghanistan.

Eagle’s Nest : Name given to the historic fort at Raigarhin Kolaba district of Maharashtra where 300 years ago,Chatrapati Shivaji, the great warrior-statesman, wascrowned.

Eiffel Tower : In Paris (France) 300 m high and built at acost of 200,000 pounds. It is now being used as aMeteorological Wireless Station.

Empire State Building : (U.S.A.) is one of the loftiestbuildings in the world; height about 365 metres; it has102 storeys.

Ernakulam : in Kerala State is famous for its backwaters.Fatehpur Sikri : 32 km from Agra; city built by Emperor Akbar in 1569, now deserted.

Fleet Street : A street in London running from Templefar east wards to Ludgate Circus. The area (with adjoiningstreets) houses the offices, and printing establishmentsof many of the leading British newspapers and pressagencies.

Gateway of India : in Mumbai harbour erected in 1911 onGeorge V’s visit to India.

Gibraltar : British fortress and naval base on west endof the Mediterranean (extreme south of Spain) key to theMediterranean.

Gomateswara : (Karnataka) famous for the 2000 year oldstatue of Jain Sage carved out of a single stone.

Hague, The : (The Netherlands) Seat of InternationalCourt of Justice; Art galleries.

Hampi : site ruins of Vijayanagar – ancient capital ofVijayanagar empire. It is in Karnataka.

Hanging Gardens of Babylon : one of the Seven Wondersof the World; planted near the Euphrates in 603 B.C.

Hiroshima : in Central Honshu (Japan) close to the‘Island of Light’ with the famous Shinto temples; firstcity destroyed by atom bomb in the Second World War.

Hyderabad-Secunderabad : Twin city-capital of AndhraPradesh.It stands on the river Musi, known for Charminar,Osmania University, Salarjung Museum – one of therichest and most varied collections in Asia.

Jallianwala Bagh : a garden in Amritsar; scene ofmassacre of innocent Indians by the British on 13thApril 1919.

Jantar Mantar : in Delhi, is an Observatory constructedin 1724 during the days of Maharaja Jai Singh II of Amber.

Jog Falls : also called Gersoppa Falls in Karnataka areone of the highest warerfalls in the world. These falls areformed by the river Sharasvati which takes a big leapdown a steep rock from a height of 253 metres.

Juma Masjid, Mandu : is in Madhya Pradesh; it depicts asynthesis of Hindu and Muslim styles in architecture.

Kanchi or Kancheepuram : Near Chennai was the ancientcapital of ancient Pallavas; famous for ancient temples.

Kandahar : This is a town in Afghanistan where Pakistanbacked 5 terrorists and forced the hijacked Indian Airlinesplane IC 814 with 155 passengers and crew aboard toland at Kandahar Airport on December 25, 1999, keepingthem hostage for seven days.

Kanya Kumari : in Tamil Nadu, famous temple (the VirginGoddess) situated at Cape Comorin on the extremesouthern tip of India where the Bay of Bengal, ArabianSea, and the Indian Ocean meet; a picturesque spot.Vivekananda Rock Memorial Buddha.

Kapilavastu : small kingdomin the north of India;associated with Mahatma Buddha.

Kaziranga : is a Game Sanctuary in Assam. It is the centreof the great Indian one-horned rhinos.

Kodaikanal : is a town in Tamil Nadu famous for itsObservatory for the study of Solar Physics.

Kovalam : is a sea-beach about 16 km from Trivandrum inKerala. Developed as a Tourist Resort by India TourismCorporation.

Kremlin : Large fortified citadel in Moscow, now theheadquarters of Russia. The Kremlin, originally built in1156 by Yuri, (George) Dolgoruki, price of Suzdal becamethe centre around which Moscow has grown.

Qutub Minar : in Delhi (88.4 m high) is one of the master- pieces of Indian architecture and art. It is the biggestminaret in the world. Completed by Altamash in 1232 A.D.

Lumbini : birth place of Buddha. It is in Nepal. TheNepalese Government have plans to develop the placewith the U.N. assistance as an Internatinal Tourist Resort.

Mahabalipuram : in Tamil Nadu on the Eastern Ghats,famous for temples and monumental architectures. Anatomic power station is being set up near here atKalpakkam.

Mecca : the holiest cityof the Mohammedan world inArabia, where the Prophet was born. It stands in thedesert. It is a place of pilgrimage and Muslims from allparts of the world visit the place it for Haj in every year.

Mount Blanc : highest mountain peak in Europe. It is inthe Alps on the confines of Italy and France, longestroad tunnel in the world.

Pentagon : in Washington. It houses many Governmentoffices of the War Department of the USA.

Petronas Twin Towers : Located in Kuala Lumpur with88 storeys high, these are the tallest buildings in theWorld.

Plassey : a village on the Ganges (West Bengal) Battleof Plassey was fought here in 1757 in which Clivedefeated Siraj-ud-Daulah and laid the foundation ofBritish Rule in India.

Pyramids of Egypt : are vast stone or brick-builtstructures on west bank of the Nile. They date back toabout 300 B.C. The largest is called the Great Pyramidwhich is 146 metres high and is one of the SevenWonders of the World. Three lakh men were employedfor 20 years to build it. These Pyramids have innerchambers and subterranean entrances built bypharaohs as oval tombs.

Raj Ghat : On the bank of Jamuna in Delhi, Samadhi ofMahatma Gandhi.

Red Square : It is a famous open space in Moscowlinked with the Kremlin by three gates used forpolitical demonstrations and processions. Lenin’smausoleum is in the Red Square.

Rome : capital of Italy; on the River Tiber; one of themost famous cities of the world also known as Eternal City.

Sarnath : situated 8 km outside Varanasi. Saranath is thefamous place of Buddhist pilgrimage in India. In the ‘DeerPark’ of Sarnath, Gautama Buddha preached his FirstSemon. Also located here is the famous Ashoka Pillar ofpolished sand-stone whose lion capital was adopted bythe new Republic of India as the State Emblem.

Scotland Yard : the Metropoliton Police Headquarters inLondon from which the force is administered CIDheadquarters.

Seringapatnam : Seringapatnam was the capital ofKarnataka during the rule of Tipu Sultan. The fourth andthe last Mysore war was fought here. Tipu Sultan diedhere fighting bravely against the British forces.

Sunderbands : is a tract of forests and swamps – 264 kmlong and 129 km wide fringing the delta of the Ganges.

Tel Aviv : magnificent city in Palestine built by the Jews;capital of Israel.

Tirupati : in Andhra State about 160 km to the north-west of Chennai is one of the holiest places in SouthIndia. This hill temple of Sri Venkateshwara is an exampleof early Dravidian architecture and is one of the finest inthe south.

Trafalgar : Cape Trafalgar is famous for the navalbattle fought between the British led by AdmiralNelson and an allied naval force of France and Spain in1805. Admiral Nelson won the battle though he washimself killed in action.

Triveni : in Allahabad (UP) Confluence of the Ganges,the Jamuna and the mythical Saraswati; a place ofpilgrimage for the Hindus.

Varanasi : or Banares is a town in UP very sacred to theHindus. It is known as the religious capital of Hindu India.Famous for Banares Hindu University, Vishwanath Temple, Manmandir with Jaisingh’s Observatory,Ramnagar Fort etc.,

Vatican : the Papal State of Italy; an independentterritory; the palace of Pope in Rome. It includes theChurch of St. Peter.

Victoria Falls : on the River Zambesi, Zambia-CentralAfrica. These Falls, the greatest in the world are 1700metres wide.

Victoria Memorial : a magnificent building inCalcutta having an art gallery and a well-laid out gardenattached to it.

Vijay Ghat : On the banks of the Yamuna in Delhi isSamadhi of Shri Lal Bahadur Shastri, former PrimeMinister of India.

Vivekananda Rock : is situated near Kanyakumari at thesouthern tip of India’s coastline. It has been so named inmemory of Swami Vivekananda.

Wagah Border : This is a border between India andPakistan. Indian Prime Minister Mr. Atal BehariVajpayee crossed the border to enter Pakistan by busas part of his peace initiative with India’s neighbour onFebruary 20, 1999.

Wall Street : a street in New York, centre of US Bankingand Finance.

Waterloo : Belgium; famous for the battle of Waterloowhich marked the end of Napoleon’s power.

White House : is the Official Residence of the Presidentof the USA. It is located at 600. Pennsylvania Avenuein Washington D.C.

Zojila : a pass in the way from Srinagar (Kashmir) to Lehand then to Yerkand in Tibet. 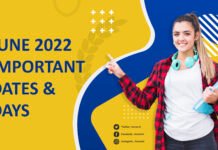 May 2022 Important Dates and Days