Home 2nd Semester Jurisprudence 2 When does Custom become law? Point out the views of Austin in... When does Custom become law? Point out the views of Austin in this regard critically. What do you understand by the term Source of Law and what are its kinds? Discuss the importance of Custom as a Source of Law.

Define Custom. What are the essential elements of a valid Custom? How far Custom is recognised as a source of law in India?

Custom only persists where Legislation has yet not peneterated. Discuss.

“Custom is to society what law is to State.” Explain this statement of Saimond.

Ans. Meaning of Source of Law—In the ordinary sense ‘Source of Law’ means the origin, beginning or the spring rise to the stream of the rule of law. Actually the term ‘source of law’ is used in different senses —

2. According to Some Jurists, “The term signifies the matter of which the law is composed, e.g., the statute law, case-law, customary law, books of jurists, etc.”

3. According to Some Jurists, the term denotes the means which gave birth to those rules which subsequently acquire the force of law, e.g.,the will of the people, reason or sentiments.

In the Indian context the expression “sources of law” is generally used in two senses. In the first sense, according to Hindu scriptures—Duty is the foundation head of all law, while according to modern jurispru-dence, it is the sovereign from where the law emanates. In the second sense, the : expression means where one must resort to get at law. Thus, the sources of Hindu law are the Sruti, the Smriti and the immemorial customs, by which the divine will or the ‘reasoning’ — which is law, is evidenced. The Code of Manu and Yajnavalkya deal with religious rites, positive law, penance, true knowledge and liberation. The code of Narada exclusively dealt with positive law alone.

Definition of Custom —In the ordinary language custom is a ha-bitual course of conduct observed uniformally and voluntarily by the people concerned. In the legal language the different jurists have defined custom as! under —

1. According to Austin, “Custom is a rule of conduct which the governed observed spontaneously and not in pursuance of a law set by a political superior.”

2. According to Salmond, “Custom is the embodiment of those principles which have commended themselves to the national conscience as principles of justice and public utility.”

3. According to Holland, “Custom is a generally observed course of conduct.” He says that the mode in which a path is formed across any grass field best illustrates the formation of such habitual course of conduct.

Essentials of a Custom —According to Blackstone, a custom to be recognised as law must satisfy the following essentials —

I. Antiquity—A custom to be recognised as law must be proved to be in existence from time immemorial, time whereof the memory of man runneth not to the contrary. This is the rule of the English law. There, this legal memory presumed to be going back to a fixed time. An arbitrary time limit, that is, the year 1189, the first year of the reign of Richard, has been fixed at which the custom must be proved to be existence. By a fiction of law, human memory is made to extend for about 800 years. But the presumption of law is that the customs which are old and whose time of origin cannot be ascertained must have started before the year 1189. However, if it could be shown that a custom came into existence at any time later than 1189 the presumption to antiquity shall be defeated.

Indian Rule —According to Manu, the great Hindu Jurist, “Immemorial custom is transcendental law.” The law in India, at present is that antiquity is essential for the recognition of a custom, but there is no such fixed period for which it must have been in existence as it is in the English Law.

2. Continuity—A custom must have been practised continuously. In England, the custom during the period from 1189 must have been en-joyed continuously without any interruption. If a custom has been dis-turbed for a considerable time, a presumption arises against it. However, Blackstone has drawn a distinction between the interruption of the ‘right’ and the interruption of the mere ‘possession’. It is the discontinuance of the ‘right’, for howsoever small a time, that ends the custom. It means that if possession for some time is disturbed, but the claim to enjoy the custom is not abandoned, the custom continues.

3. Peaceable Enjoyment —The third essential of a valid custom is that it must have been enjoyed peaceably. If a custom is in dispute for a long time in a law court, or otherwise, it negatives the presumption that it originated by consent as most of the customs naturally might have originated.

4. Obligatory Force —A custom, to be valid, must have an obligatory force. It must have been supported by the general public opinion and enjoyed as a matter of right. If practice was maintained by stealth or by something of that sort, it cannot become a custom.

5. Certainty—A custom, to be valid, must be certain. A custom which is vague or indefinite cannot be recognised. It is more a rule of evidence than anything else. The court must be satisifed by a dear proof that custom exists as a matter of fact, or as a legal presumption of fact.

6. Consistency—Custom, to be valid, must not come into conflict with other established customs. There must be consistency among the customs. It is, therefore, that one custom cannot be set in opposition to the other custom.

7. Reasonableness —A custom, to be valid, must be reasonable. Prof. Allen says that the rule regarding reasonables is ‘not that a custom will be admitted, if reasonable, but that it will be admitted unless it is unreasonable.’ The courts are not ‘at liberty to disregard a custom when-ever they are not satisfied as to its absolute rectitude and wisdom, or whenever they think that a better rule could be formulated in the exercise of their own judgement otherwise a custom will lose much of its force and sanctity.’ For declaring a custom inapplicable on the ground of unreasonablness it will have to be shown that it is obviously opposed to reason and right.

8. Conformity with the Statue Law—A custom, to be valid, must be in conformity with statue law. It is a positive rule in most of the legal sytems that a statute can abrogate a custom. Although according to the Historical school, a custom is superior to statute and it can supersede a staute, this view has nowhere been recognised in practice. The English rule is that a custom will not be recognised if it is in conflict with some fundamental principle of the common law.

In case all the above mentioned essentials of a custom are proved, it is law, but the courts have power on sufficient grounds to change the law it embodies. 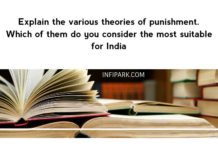 Explain the various theories of punishment. Which of them do you consider the most suitable for India 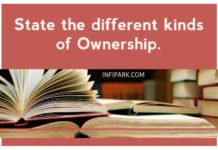 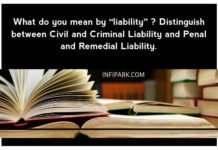 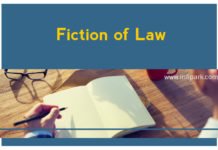